The world of Outdoor Media in South Africa is quickly climbing the global market ladder, but should be further than it is today for we are a highly creative bunch. Billboards which are highly interactive and leave street viewers in awe, are a better form of advertising as the information portrayed stays longer in the consumers brain, keeping them well aware of the product and  eager in spreading the word.
How a billboard looks, functions, where it is positioned is one of our strengths, as we make sure that the client creates top of mind with whatever it is they are advertising as well as position them directly in between competition and high consumer traffic areas.
Its always exciting to work with companies who display creative, interactive and jaw dropping innovative billboard concepts, that send a message across and make traffic for fellow drivers seem “not so bad after all”.
Outdoor media/ advertising companies should continue to do global forward billboard ads, and keep the ball rolling on informing viewers in a more exciting and fulfilling manner.
Typical billboards need stronger messaging concepts. 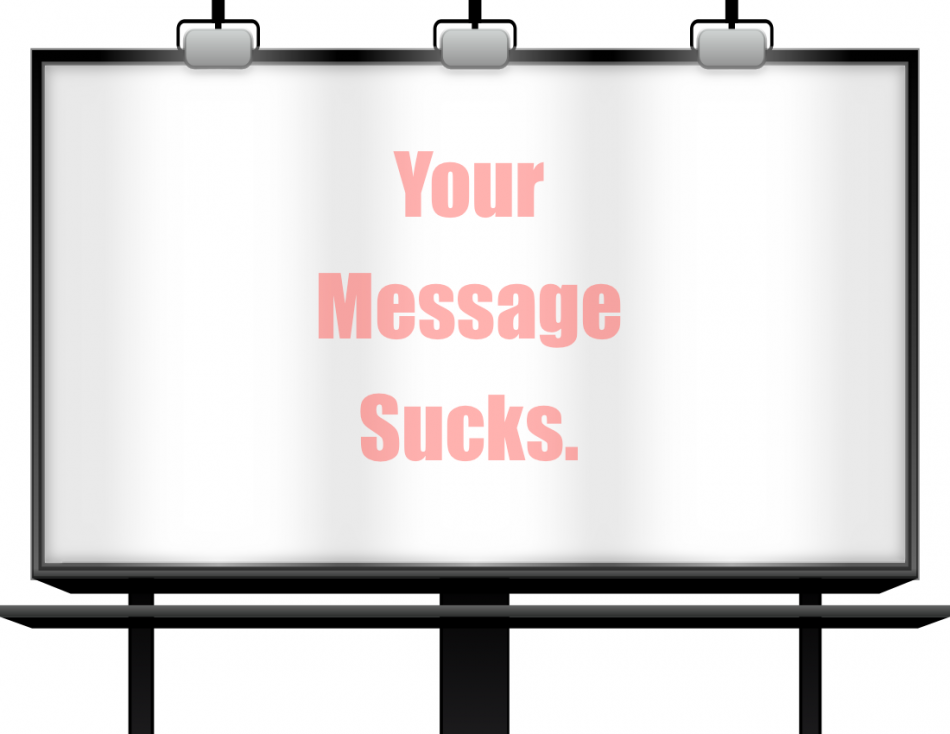 Below is an ad campaign that took place abroad, and features a really cool billboard concept whereby the light bulb molded within the face of the board has a sensor installed within it, and lights up when a pedestrian passes by. This kind of advertising is something that sparks ideas to create billboards which will remain on the scene for longer due to peoples demand, to see more creativity. 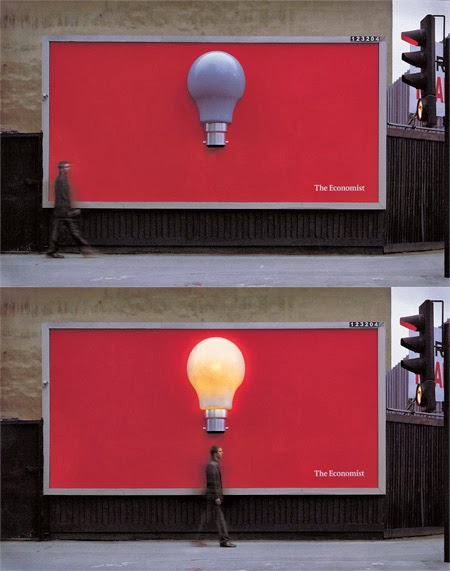 Hey, its not to say the billboard advertising market in South Africa sucks- Oh No!! WE indeed have really cool concepts that have been evacuated right here in the beautiful motherland, in fact we are one of the best countries in terms of Billboard ads! Below are a few billboard ideas I have come across, and they all pretty much speak for themselves.
The Bronx Men’s Shoes campaign 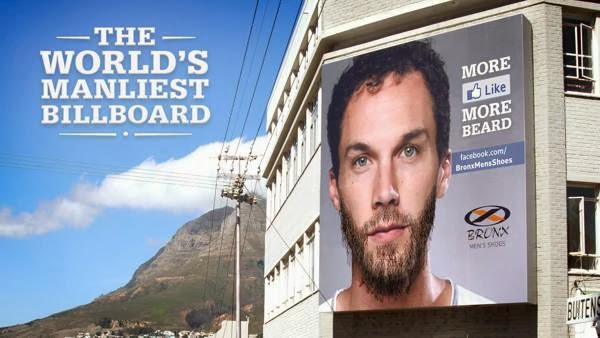 This was in fact the world, yes the WORLD’s first ever interactive beard growing billboard, right in the heart of Cape Town. Bronx Men’s Shoes , the “man enough” brand in SA, had installed a 6 meter high potrait of a man’s face covered in stubble on the corner of Church and Buitensingel street, Cape Town. 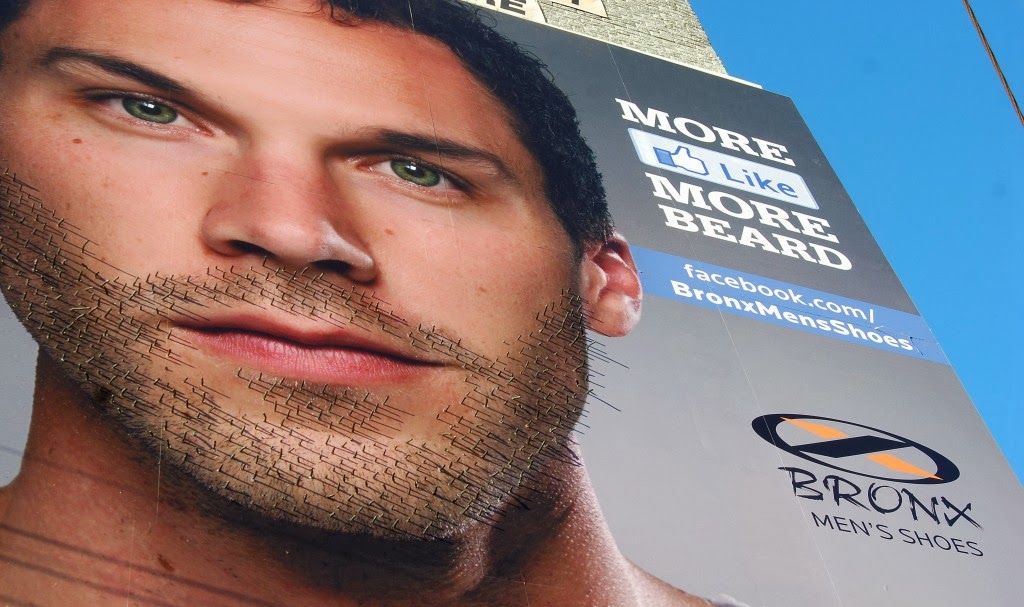 South Africans courtesy of a cleverly installed webcam, could then trigger the man’s beard to literally grow longer, by the simple click of a ‘like’ button on their Facebook page.
The infrastructure was built with ropes peaking out of digital motor-operated holes, in order to create the visual concept of the beard growing out. 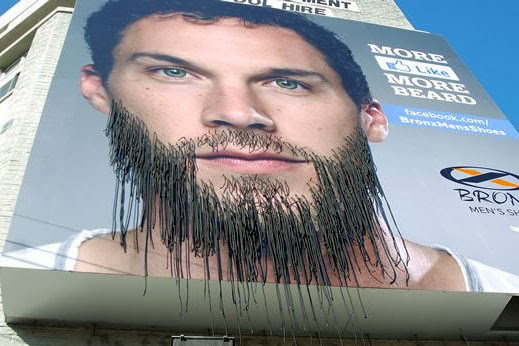 Viewers did indeed appreciate the humour and the facebook page was blowing up daily, helping the man on the billboard grow a rope infested beard by the minute as well as create serious awareness for the brand.
Now this is creativity at its best!
Heaviest Billboard for SuperSport by Ogilvy 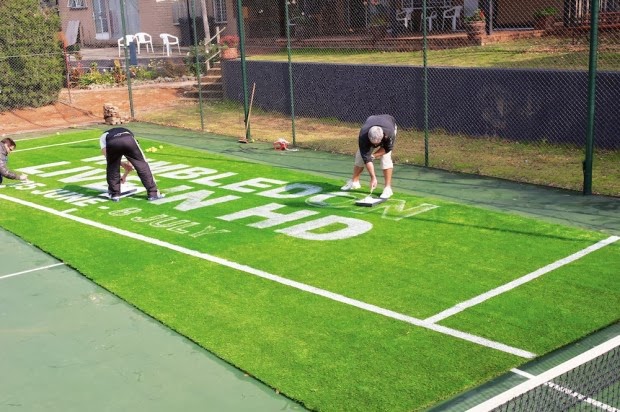 Billboards aren’t the easiest thing to innovate. This large format out-of-home billboard was done by Ogilvy Johannesburg. Ogilvy in partnership with SuperSport, created what seemed from far to be a normal print billboard advertisement, but up close is real (synthetic) grass for a SuperSport High Definition (HD) campaign. The creative idea was developed to highlight Wimbledon on HD over the two week time period, in a way that passers-by could have a real life HD sporting experience.
The concept literally stems from the idea of getting a piece of grass on to a street pole. To highlight the fact that consumers can now watch their favourite tennis game in HD, Ogilvy used synthetic grass to drive home the message that one can “see every point up close”. 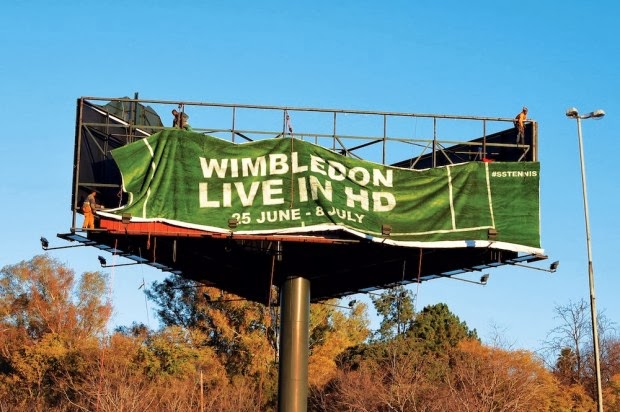 Hand painted, weighing at 360kg and measuring in at a staggering 4.5 by 18 meters high the Wimbledon in HD billboard took 3 days to erect. Passers-by in Sandton were pleasantly surprised to see that on the billboard there was real wear and tear on the centre court line of the billboard which represented the progression of the tournament- just as one would see if they were in Wimbledon.
The billboard is the heaviest that has ever been created in South Africa. 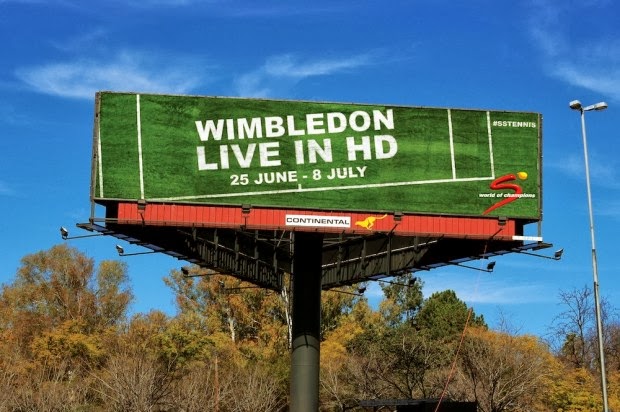 Mini Coupe 3D Billboard
Lastly, we have the Mini Coupe’s massive 3D billboard which took off in Cape Town International airport, “GO CAPE TOWN”, once again an innovative billboard.
This billboard was bigger than live- scale and featured the car in  a shark cage, surrounded by sharks. The pay-line read “Another Day. Another Adventure”. The billboard kicks off a campaign that is not only a visible manifestation of MINI South Africa’s adventurous nature, but also aims to highlight their commitment to AfriOceans Conservation Alliance (AOCA) – which is working towards safeguarding the sharks in our oceans. 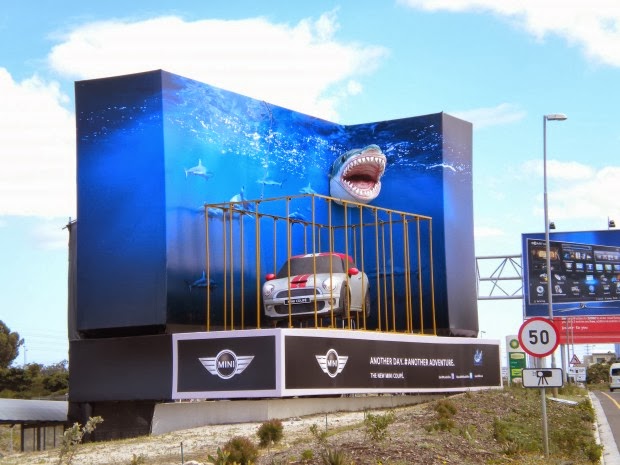 Traditional Billboards are our strength!!

Putting Up A Billboard
Scroll to top