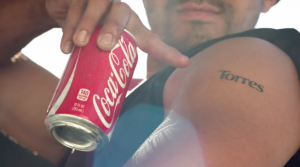 This concept isn’t forever, but we sure hope it was,  Coca-Cola started off National Hispanic Month (which runs from Sept.15 to Oct.15) with a line of temporary-tattoo cans, targeted to Hispanic and Latino Americans. …because their the only ones who would be interested in such a concept?

Well, based on research, Latinos have a particular pride in their family names, which reflect their history and heritage – the cans feature common family names, in reverse!


You simply peel the sticker off, place it on to your skin and use the moisture from the can (hopefully at a cold temperature) to affix the name onto your skin.
The campaign indicates the sincerity and togetherness of a culture, also symbolising the tagline for coke which emphasises on sharing a coke. It brings people together and builds a sense of brand loyalty among consumers alike.
The video below is a clear indication that Coca-Cola always knows what’s good for the people!
The work is accompanied by the hashtag #OrgullosoDeSer, Spanish for “proud to be,” and was created by ad agency David—which, incidentally, markets itself as a “first-name agency” that “believes in the personal.” Oh, the irony! This campaign was indeed perfect!
https://www.frontseat.co.za/wp-content/uploads/2015/09/coke-tattoo-can-hed-2015.png 363 652 mulalo siminya https://www.frontseat.co.za/wp-content/uploads/2015/09/frontseat-logo.png mulalo siminya2015-09-18 12:33:002015-11-06 10:56:48The Coca Cola Tattoo Can
0 replies