Coca-Cola’s #CokeMyName Let’s You Interact With A Billboard 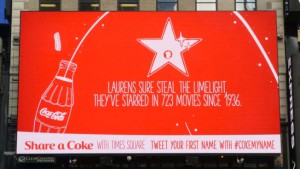 Just when we thought the amazing drinkable billboard by Coke Zero was amazing, Coca-Cola has launched another eye-catching outdoor idea, this time in Times Square.
The “Share a Coke” campaign  continued by showing fun facts about the names of people who tweet to the signs hashtag #CokeMyName.
At the heart of the display was a microsite that Coke and Google created together, to pull in facts about the 1000 names the soda company had printed on it’s cans and bottles.
After a name is typed in, a bunch of digital facts about the person’s name flow across the screen out of an animated bottle of Coke for a few minutes. To bring this experience to it’s outdoor billboard in Times Square, Coke enlisted Clear Channel Outdoor to build a campaign that is activated through Twitter. Fans who tweet with their name and the hashtag #Cokemyname are populating the billboard in real-time.

Then a webcam set across the street automatically snaps a picture of the person’s name. Coke’s social media team then  tweets back the photo of the person within one hour.
The activation campaign ran for two weeks and served up over 200 custom messages per day, with the billboard itself being the only media promoting the campaign.

A few of the tweet requests reflected as follows:

A KFC Bucket Selfie For Memories.