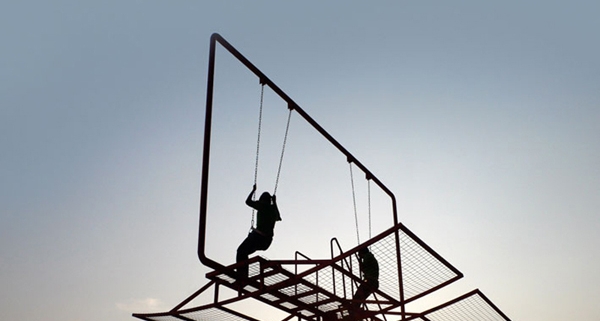 SWINGIN’ ON A BILLBOARD
Old and abandoned  billboards shouldn’t have to stay vacant and rusted, especially the ones closer to the ground in areas where people are constantly moving around going about their daily lives.
How amazing would it be to have a billboard converted to a swingset?? Many people would pass on by, have a quick swing and then go about their business. The swing set would attract alot more people, than one that’s rusted and bare.
Paris-based architect Didier Faustino made this cool swing set out of a converted advertising billboard for the Shenzenhen- Hong Kong Bi-City Biennial of Urbanism and Architecture. Now many people are asking to do the same to vacant billboards throughout America.
Website: mesarchitecture.org A beautiful piece written below, that defines the project in the best possible way:
“Double Happiness responds to the society of materialism where individual desires seem to be prevailing over all. This nomad piece of urban furniture allows the reactivation of different public spaces and enables inhabitants to reappropriate fragments of their city. They will both escape and dominate public space through a game of equilibrium and desequilibrium. By playing this “risky” game, and testing their own limits, two persons can experience together a new perception of space and recover an awareness of the physical world.”
https://www.frontseat.co.za/wp-content/uploads/2014/10/pod0040-billboard-swingset.jpg 600 600 mulalo siminya https://www.frontseat.co.za/wp-content/uploads/2015/09/frontseat-logo.png mulalo siminya2014-10-02 10:50:002019-10-23 11:00:42Swingin' On A Billboard
0 replies

There Are Two Kinds Of People